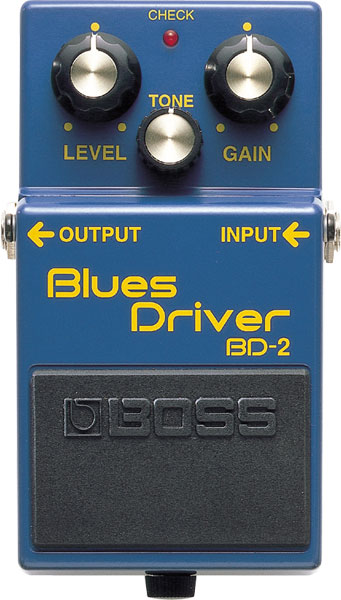 When Billboard artists who can afford any piece of gear choose to put a Boss pedal on their board, it's the ultimate testimonial. Count the Boss BD-2 Blues Driver among the numerous pieces of gear that has been given the "King John Mayer Midas" touch with its appearance in his rig. Long before he gave it Mayer-cred, many other studio and touring guitarists were using this pedal as insurance in case a vintage tube amp wasn't on hand for a session or gig. It was designed to emulate the tactile dynamic response and woody tone of an old tweed amp just breaking up, but it's been co-opted and modded for other purposes over the last two decades.

You can count on bulletproof construction and affordability with most Boss pedals, but you're not always guaranteed a wide range of adjustability or subtlety. The nice thing about the BD-2 is that is actually does provide a wide range of tones, some more desirable than others, along with all the usual ruggedness and simplicity of Boss pedals. This pedal wouldn't have lasted as long as it has if it weren't able to deliver on its blues-in-a-box promise. Even if you don't have an old tube amp or boutique overdrive on hand, the BD-2 is a workable substitute for that sweet, tactile blues sound. If you do have a tube amp, though, the results are even tastier.

With three knobs - level, tone and gain - like a Tube Screamer, the BD-2 has a few arrangements that serve as good starting points for a few types of music. It doesn't have the boosted-mids of a Tube Screamer and has a higher gain ceiling, but you can dial in similar tones for blues or country. With the gain and levels at noon or so and the tone around 10 or 11, you can cop a pretty good country tone (especially with the help of a good compressor) on the bridge pickup. The tone knob is critical for dialing in different genres with this pedal. A cleaner blues is found with the level past noon, gain around 10 and the tone around 10. A meaner blues is found dialing the level back, upping the gain past 3 o'clock and leaving the tone at noon. Pushing the gain further can yield a nice classic rock sound. Metal and brown sound won't happen, no matter how much twiddling you do. Sorry.

Any search for a good Boss BD-2 will inevitably surface a number of modded specimens, with a sizable chunk of those done by Robert Keeley. His "Phat" mod as well as Alchemy Audio's mod are two that you'll frequently see on Reverb. Both aim to open up the harmonic spectrum that the BD-2 can produce and give a it a fuller, richer tone. While some of these slightly more expensive than a new stock BD-2, you can expect to pay double for a Keeley-modded specimen. It should be noted that Paisley and Mayer use modded versions - not stock, out-of-the-box Blues Drivers.